A New Awardee! (A Democrat!)

The most amusing amendments that were submitted on House SB2? Two from Democrat Roland Gutierrez: The first, a single number change in current law; changing the current appraisal cap for taxation on homes from 10% to 5%; would need a Constitutional amendment but there was an outstanding bill for that. Bonnen was left to declare probably the most ludicrous Point of Order on the single number change as being ‘Not germane’ – with ALL the other changes in the bill on the appraisal process.Gutierrez pulled the next one that would have put a 10% appraisal growth cap on commercial property because Bonnen was ready to apply the same outlandishness to that one. .
Sounds like a great idea, right? Of course it is- and not ONE Democrat and half the GOP members would NOT have supported a bill with those. the future impact on ALL local entities would have been MASSIVE. Would love to see the long-range fiscal note it would have produced.
By doing this, Rep. Gutierrez more or less proved how unserious the GOP is about REALLY controlling tax growth for local entities. He schooled the entire GOP with this little piece of kabuki Theater.
Sometimes you have to give kudos to the opposition for a clever stunt; this is one of those times 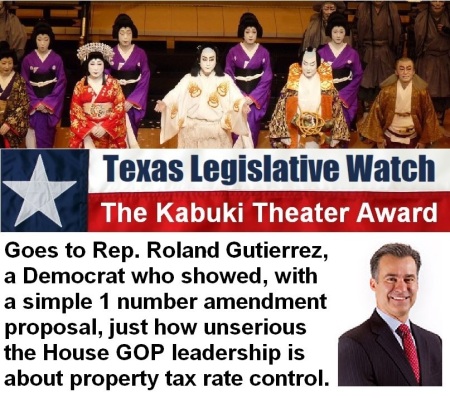 This entry was posted on Thursday, May 2nd, 2019 at 1:18 am and is filed under Uncategorized. You can follow any responses to this entry through the RSS 2.0 feed. Both comments and pings are currently closed.