UPDATE2: I added another worksheet of ‘special interest’ rating of the Texas House member. Only Texans for FIscal Responsibility has released their latest; the history for the others is included. Also added a page to graph given representatives.  .

UPDATE: I pretty much completed my analysis on the RIce/Jones Lib-Con numbers here. Will use this to include the ‘interest group ratings on a separate worksheet when they all become available.
Mark Jones has been doing this analysis of the Texas Legislature since 2011 and- while not perfect- I consider it to be the most objective assessment of voting patterns I’ve found.  It uses every recorded vote that there are at least 5 votes (in the house) that differs from the majority and segregates the votes into liberal-conservative blocks. It does NOT take into account the value of any one bill vs. another, weighing them equally (a downside). Still, I find the correlation as a good starting point and, a reference to other groups’ rankings.

The best use of Jones’ data is to do comparisons in terms  ranking within the given house of the legislature- and compare the changes in positioning over multiple sessions.  And, for the House, that’s what I’ve done here on the worksheets after the first one that contains the raw data for the last 4 sessions.  Any one of the following worksheets can be copied and populated from other representatives to produce appropriate graphs.

Jeramy D Kitchen has also done great work here and has included the newly released Fiscal responsibility Index. Also, The Texans for Fiscal Responsibility Index has been released here; as expected- considering the spending binge that went on in Austin, the grades are way down.

Here is an example of the type of graph that visually speaks volumes These four folks are all fairly conservative people who were appointed as Chairs of substantial committees for the first time. So, why the drop in the percentage ranking in the GOP caucus?  One can only assume they tend to follow ‘leadership’ more out of loyalty- and leadership was directing them to LESS conservative voting trends.

When I’m done with the Senate side, I will add it as a separate worksheet set here. 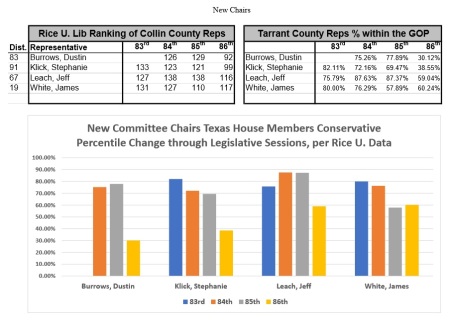 This entry was posted on Friday, June 7th, 2019 at 8:45 am and is filed under Uncategorized. You can follow any responses to this entry through the RSS 2.0 feed. Both comments and pings are currently closed.